On October 24th, CBC’s Facing Racism Alumni Group carpooled to downtown Denver to visit three of many historical markers in Colorado’s history regarding racism. Thanks to technology, two of the members joined us via Zoom on Pastor Anne’s phone to come long on the tour virtually. Becky Whitaker introduced the idea to the group and organized the sites we would visit and learn from. Becky shared with the class about the Zinn Education Project (https:// www.zinnedproject.org/) and compiled three locations suggested from the website for our group to research and visit. Three members of the group, Susan Wirt, Natalie Ralston, and Diana McMahan took time to research beforehand, and then present at each stop. Excerpts from their presentations are included in this summary.

Our first stop took us to a marker about lynching in America, and the lynching of Preston Porter, Jr. on Larimer & 14th. Researched and presented by Susan, we learned the abhorrent details about 15 year old Preston “John” Porter Jr.’s tragic murder. On November 11, 1900, the three Porters (father and two sons) migrant rail workers, were in Denver to cash their railroad wages check, when they were stopped by police to be questioned about the murder of a 12 year old white farm girl, Louise Frost. Even though the Porters denied involvement, they were arrested and jailed in the old city jail at this same location. Police used coercive tactics to interrogate Preston, and used threats to lynch both his father and brother if he did not confess. Eventually, stating he wanted to save his brother and father, he confessed under pressure. Public calls began for his lynching, including a gathering mob outside the jail where the governor at the time, Charles Thomas, refused to intervene. Denver officials handed Preston over to the Lincoln County Sheriff to subsequently face trial. While the two were on the train, they were seized by another white mob. The mob waited for hours to gather spectators, estimated at 200-400 men and boys, and was reported by the Denver Times as a crowd that “shook with pure enjoyment of the situation.” Preston was chained to a railroad stake and burned to death. He cried out, “Good Lord…forgive the people doing this. Good Lord have mercy on Mr. Frost” (who lit the first match), “and the little girl.” No one was held accountable for killing Preston, or for failing to protect him. The Governor commented that there was, “one less Negro in the world.” Preston never received a full or fail trial, and Colorado public officials were complicit in his death.

Many in our group commented on the horrific nature of this murder, while also being appalled by the crowds’ actual enjoyment of the situation, and how the prominent racial hostility in American culture was such a danger to Black people when crimes were discovered. Allegations against Black people were rarely subject to serious scrutiny, often resulting in mob violence and the threats of lynching. We discussed the ways in which the justice system today still fails to be an institution of fairness and justice for people of color. 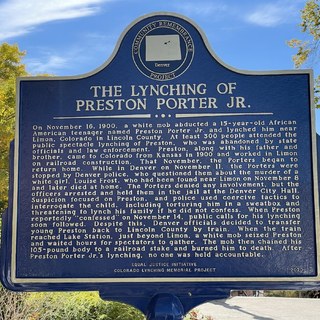 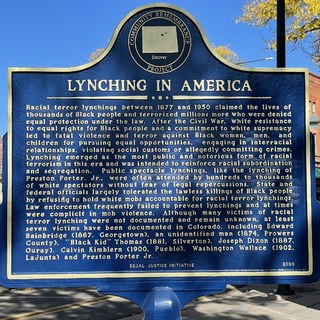 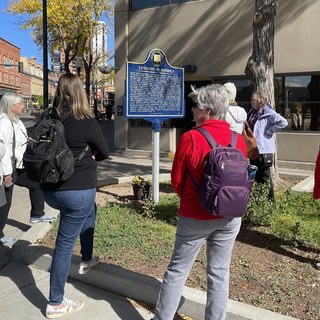 Our second stop on our walk took us to the marked location of the anti-Chinese riot of 1880 on 20th and Blake St, where Natalie’s research and presentation informed us of a great deal of history, in addition to problems with the way this incident has been preserved. According to PBS, Chinese peasants from the Canton Province began arriving on California’s shores in 1850, during the Gold Rush. Many worked in mines as laborers, or as fishermen. By 1865, Central Pacific Railroad was working to complete the transcontinental railroad and they had a labor shortage. Despite anti-immigrant sentiments, and a widespread belief that Chinese immigrants were unreliable, they hired many Chinese workers to complete the western portion of the railroad. According to CPR, more than 12,000 workers from southern China were hired by the Central Pacific Railroad. They made up an overwhelming majority of its workforce.

During this time, Chinese immigrants started settling in Colorado, and by the 1870s, approximately 500 Chinese people lived in Denver’s Chinatown. On October 31, 1880, 141 years ago, an argument broke out between Chinese and white patrons at a saloon on the 1600 block of Wazee Street, becoming the first race riot in Denver’s history. The controversial plaque you can read in the photo, commemorates the riot, as well as Denver’s Chinatown. Dozens of people were injured, a Chinese man, Look Young as killed, and Denver’s Chinatown was destroyed. One might not know the plaque is controversial without understanding the ways in which history is often written through the eyes and experiences of people other than the victims of violence, oppression, and racism. In a CPR story from September 2019, Colorado state historian at the time and CU-Boulder history professor Dr. William Wei, shares, “If you read this plaque carefully, you notice that it does not actually dwell on the victims of this race riot, the Chinese. Instead it focuses on the heroes who came to their rescue. Let me say that I applaud the heroes who came to their aid, but it does reflect a certain attitude that persists today. The need to have a white savior.” The plaque honors and names the white saloonkeeper, the white gambler, and the white madam, but it does not name Sing Lee (or Look Young), a laundry worker who stumbled into the riot and was beaten to death. Wei goes on to say, “They’re not apt to identify the victims because that would humanize the experience.” In addition, the plaque reads “Chinese Riot” as opposed to the more accurate, “Anti-Chinese Riot”. Furthermore, “Hop-Alley” is a derogatory term, because it refers to opium dens which were highly condensed within Chinatown at the time, and where majority of customers who used were in fact, white Denverites, and yet the Chinese were blamed for the area’s drug use.

The group commented on how this marker, even though it was just recently placed in 2020, is still problematic in its skewed perspective. We talked about how still to this day, anti-immigrant rhetoric fuels misinformation and upholds fear about immigrants coming to the U.S. We also lamented the fact that yet again, those who murdered Young were never brought to justice. The Colorado Asia Pacific United organization is currently rising funds to create more accurate historical markers, and a mural to honor the history of the area. You can visit and perhaps consider donating here: https://www.gofundme.com/f/reenvisioning-denvers-historic-chinatown 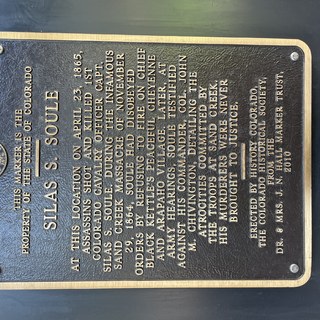 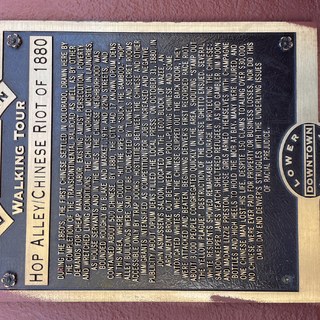 Finally, at our third stop on 15th and Arapahoe, we were informed by Diana’s research and presentation about the Silas S. Soule assassination. Silas Soule was the second son of a family of abolitionists, born in July 1838. He assisted with the Underground Railroad in KS by escorting slaves from MO to KS when he was just 17. Soule enlisted in the 1st Colorado Infantry at beginning of the Civil War and fought in Western campaigns. In September 1864, he and Major Edward Wynkoop worked together with Black Kettle of the Cheyenne tribe and other chiefs to negotiate a peace treaty with Governor John Evans. (Do you recognize the names Wynkoop and Evans? Think about how/why/where their names have been preserved/revered?) Evans refused to negotiate as hostilities were quite strong between the US and native tribes. He finally allowed the peaceful tribes to voluntarily become “prisoners” by moving their camps to the area surrounding Fort Lyon. On November 29, 1864, Soule and his company were part of the troops that went to Sand Creek under the command of Col John Chivington of the 3rd Colorado Cavalry. However, Soule refused to allow his men to participate in the attack and the subsequent massacre of the Cheyenne and Arapahoe people encamped there. Approximately 230 people, mostly women, children, and the elderly, were killed and many of their bodies were mutilated by the soldiers. Soule’s reputation was marred for defying the orders of his superiors and then reporting their actions. Several months later Soule became the Provost Marshal in Denver. He was married on April 1, 1865 and just 22 days later he was murdered while investigating gunshots in town. He was just shy of his 27th birthday in July. The murderer, Charles Squier, and his companion Charles Morrow were never tried and convicted but instead escaped. Interestingly, it is not certain whether Soule’s murder was setup because of his role in exposing the atrocities of Sand Creek or whether he was simply a victim of an encounter with a drunken man with a gun. Diana recommended a book for more detail, called, “Silas Soule: A Short, Eventful Life of Moral Courage,” by Tom Bensing. Our group talked about the differences with this being a commemoration of a white man in comparison with the others. It was noted by one member of the group that the plaque has a more “official” seal than the other two as property of the state of Colorado. We spoke Soule’s life work, and about the risks of being co-conspirators in the work toward ending racism. 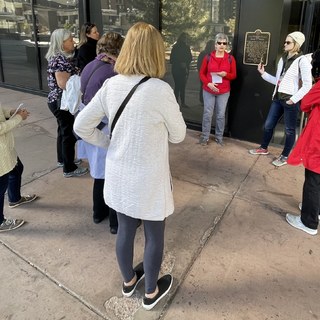 Our group absorbed a lot, reflected on why many of us were learning these truth for the very first time, and discussed the ways in which historical events are framed, and from whose perspective they are considered and presented. We talked about future possibilities for field trips in the effort to re-examine history and current events through an anti-racist lens, and how that then calls us to continue to participate in the often messy, but necessary work to create justice and equity in our communities.

Want to be part of the Facing Racism Alum at CBC? Check out Soul 2 Soul Sisters and their Facing Racism programs on their website at: https://soul2soulsisters.org 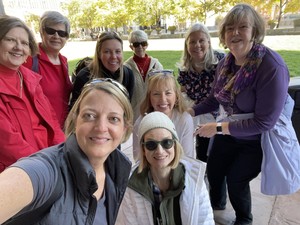